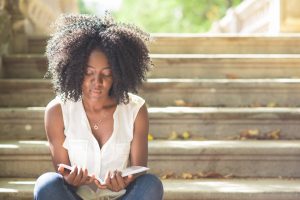 While there’s yet to be bloodshed (at least I haven’t heard about it in any of my writing circles), there are people lining up on both sides of the twenty-first-century publishing debate.

In one camp are the “traditionalists” who cite the dismal quality of many self-published books, the absence of gatekeepers, and all the marketing and self-promotion indie writers have to do just to keep their heads above water.

In the other camp are the “indies” who point to draconian publishing contracts, an industry that lacks diversity, and all the marketing traditionally published writers still have to do to keep their heads above water.

And both camps point to statistics that suggest unlikely chances for success no matter what publishing route you take.

By adopting an entrepreneurial mindset, authors can create sustainable writing careers.
Powered By the Tweet This Plugin

The Best of Both Worlds

I believe the “battle” between the groups is a lie that only ends up hurting authors, no matter what path they choose. The beauty of the twenty-first-century writing career is that emerging authors can learn from both camps. I truly believe that by adopting an entrepreneurial mindset, authors can create sustainable writing careers.

I’m a member of several online self-publishing groups. The marketing tactics and techniques I learn from other members are head-and-shoulders above what I’ve learned anywhere else. By paying attention to indie authors, authors seeking to go the traditional route can employ methods such as reader magnets that can exponentially grow their email lists. Lists that will only serve to strengthen your appeal when approaching agents and editors.

Indie authors can hire professional editors, proofreaders, and cover designers who will make their books indistinguishable from traditionally published work.

The future of writing and book publishing is one where writers harness their collective power to shape the industry’s future— delivering books people want to read in the ways they want to read them.